Skip to content
Waiata Mai: Every Thursday 12:30 pm - In the Library - All Welcome Last day of Term Friday 8 July

Taikura Rudolf Steiner School had its beginnings as Queenswood, a private girls’ primary boarding and day school, which opened around 1921. Taikura currently has classes from 1-12 (year 2-13) and has a roll of some 400 pupils.

The building was a large, two-storied wooden one, which had been a family home at the turn of the century. Later, a prefabricated classroom was added to give more space as student numbers increased.

Taikura Rudolf Steiner School was founded in 1950 from a long established preparatory school for girls, Queenswood. It has grown steadily with new buildings replacing the original boarding house. Today the school has four separate kindergarten groups and with classes from 1-12 (year 2-13) has a roll of some 400 pupils.

Miss Edna Burbury and Miss Ruth Nelson had been inspired by Rudolf Steiner’s educational writings, and by what they had seen on a visit to the Waldorf School in Stuttgart. They determined that New Zealand children should have the benefit of a Waldorf education. However, it was not until 1950 that the opportunity arose to establish a private primary school in Hastings.

In 1949 Miss Erica Hoby, who had been the Head Mistress of ‘Queenswood’, decided to sell the school and retire. Miss Burbury and Miss Nelson saw this as an opportunity to be grasped. At the time it was not possible to establish an alternative education system in New Zealand, although it was possible (upon approval) to alter the curriculum.

By this time there was a well-established group of anthroposophists in Havelock North and members were supportive of the idea of taking on ‘Queenswood’ for the future, and with generous gifts by Ruth Nelson, Edna Burbury and others, the money was raised for its purchase.

It was realised that the change from the existing school to a Rudolf Steiner School would need to be made gradually. One of the early problems was how to introduce boys into what had been a girls’ school. It was decided that boys should be introduced into the new class one each year. However, it was to be many years before the number of boys and girls were equal in the school.

Gradually, teachers interested in Waldorf education were sought out, such was it that between 1951 and 1955 there were many additions to the staff.  Gradually changes were brought about.

In 1962 Karl Ege, one of the original teachers at the very first Rudolf Steiner School in Stuttgart, visited the school. He gave invaluable advice to teachers and brought significant changes to the administration.

The impact of Edwin Ayre on Waldorf Education in Hawke’s Bay is not to be underestimated. An architect by profession, his initiative and drive was to not only expand the Rudolf Steiner School to include High School students, but also he recognized the need to start a preparation course for new teachers at the School.

From this initial programme, was to grow the institution we now know as Taruna. He also introduced religion lessons to the School and in 1973 the first Mid-Winter Festival was held.

Edwin Ayre designed the classrooms which are now used for Classes 1-3 and gradually the School grew. When the High School started it was decided the time had come to change the School’s name to Hastings Rudolf Steiner School since the name ‘Queenswood’ still carried the connection to the original preparatory school for girls, in the wider community.

A new High School building was opened in 1993 and named Edwin Ayre as a fitting tribute to one of the school’s founding fathers.

In the late 1980’s the Board of Management envisaged re-development of the school and initiated the process. Fiona Christeller, as architect, designed the new buildings, with the emphasis on creating a village of complementary buildings and open spaces, within the very tight constraints of the site. The school has a Special Character, and this was carried through in the brief. The new school buildings (the Edwin Ayre building, the Katherine Laing Building, the Gymnasium, Administration block and Auditorium) were built between 1991 and 1998, under the supervision of the late Pat Wähl.

Taikura House was purchased in 2008 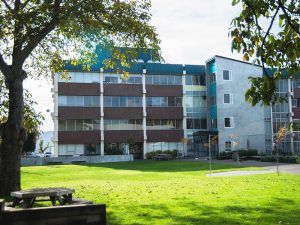 In 2008, the School Trust purchased the Lowe Corp building and renamed it “Taikura House”. Substantial renovation occurred on the third and part of the second floor to create spaces suitable for teaching and learning. At the same time an external staircase was built for student access from the school grounds.  The purchase of this building also provided well-needed extra ground for student activities.

The purchase of Taikura House created an opportunity for a significant and managed building development plan; to move the High School into Taikura House, create a woodwork and metalwork facility, relocate our library (which was in an old house) and create an all-weather sports turf, along with necessary landscaping developments.

The Grapevine is produced weekly during term time only, with the first publication for each term being in week one.